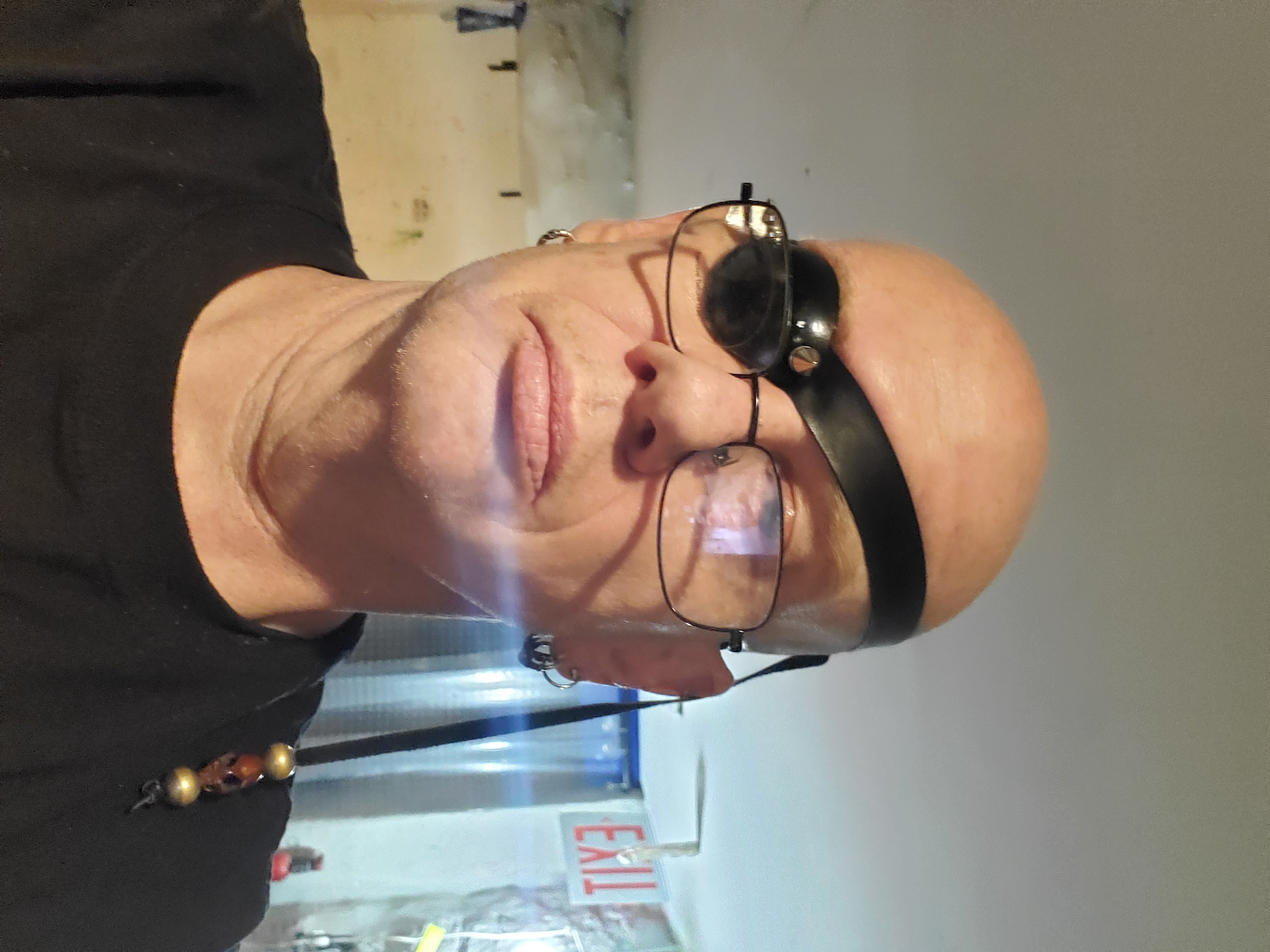 My hobbies include twisting wire into various creatures, sketching, drawing with technical pens and pencils, silk-screening and making "stuff" from other stuff found around the garage and in garbage.
I like to listen to TOOL, Butthole Surfers, KMFDM, Jimi Hendrix, Frank Zappa, Alice Cooper, David Bowie, Iggy Pop, Pink Floyd's THE WALL, random punk and heavy metal and other loud Obnoxious Music!

OK,
since you came to see my page
here is my sob story.
(Yeah, I know... poor me.)
Om July 28th, 1988 I was riding my bicycle and I was hit by a car...
It blasted into my left side, breaking both bones in my shin. Then I landed on the roof, crushing it to the steering wheel. At that time my right arm was inside the broken windshield. The car then hit another car. With my right arm still inside the windshield I was thrown from the car, my arm was ripped almost completely off, it was attached to me by only a piece of flesh of my inner arm. I flew and landed 30 feet away. While my body was lying in the street, waiting for emergency rescue, a very kind doctor that was stuck in the traffic, argued with police at the scene, ending with that Dr screaming at the officer, "I'm a fucking doctor, let me in!" That doctor checked on me while I was in the coma and he would talk to my mom and make sure she was ok. I met that doctor a few years after it happened and he's the one that told me about his involvement that day and I finally had the chance to thank him for everything he did for me

I was in a coma for 8 days, in the hospital a total of 69. I've lost most of the use of my right hand, and YES, i was right handed, I now have severe nerve damage and missing muscle tissue in my right arm and hand and partial use of it, I also suffer from CONSTANT FUCKING PAIN in my arm from the nerve damage. So I now draw, write and do most everything else with my left hand.
I also have double vision, so, i wear one of the eyepatches that I've been making for about 30 years so i only see one image.

Buttt, anyway...
As a result of this accident it helped me realize one thing...

Before my accident I didn't know what I wanted to do with my life,
I was a Relocation Engineer* at the time and I knew I wanted to do
something else. I didn't know what it was, but I knew it was creative, always loved movie make-up and special effects. I still find that a fascinating field, but never knew enough about breaking into that field. But I realized that the only thing that I EVER really wanted to be was an artist, just an artist! When I was in the hospital, I didn't know how bad my arm actually was, so I asked one of my doctors if I could take my arm out of the sling so I could try to draw, he said, "Sure" and left  my room, when I took my arm out of the sling and put a pencil in my hand and... nothing happened… I couldn't move my hand at all. All I wanted to do was draw and I couldn't, my right hand can't even fucking move anymore! I was devastated, my one passion, taken away from me! All i wanted to do was fucking draw and i couldn't... but I still wanted to draw. So, I did the only thing I could think of, I picked up the pencil with my left hand and I started to draw, it wasn't the best sketch I ever did, but I did it, actually was a theme I've done before, a dude with his eye hangin out, but my mom thought it was pretty telling, since I drew him with his right eye hanging out and at the time, my right eye was closed and the doctors said that it might never open and if it did, I might not be able to see out of it, BUT I fooled them, it opened and now i see twice as good cuz I see double now! Since then I've taught myself to draw better with my left hand than I ever could right-handed. It takes me longer to get it the way I want, but I'm satisfied with the results.
If you want to see my first lefty drawn pic, click here.
I know it's not very good, but it was the first time I ever tried to draw with my left hand...

BTW that old pic is pre-accident Garry, when I had 2 working eyes, 2 working hands and a habit of flipping off the camera when it was pointed at me.

But,
if you like what you see
this is Melissa...
Melissa thumbnail
To read about Melissa Click here. 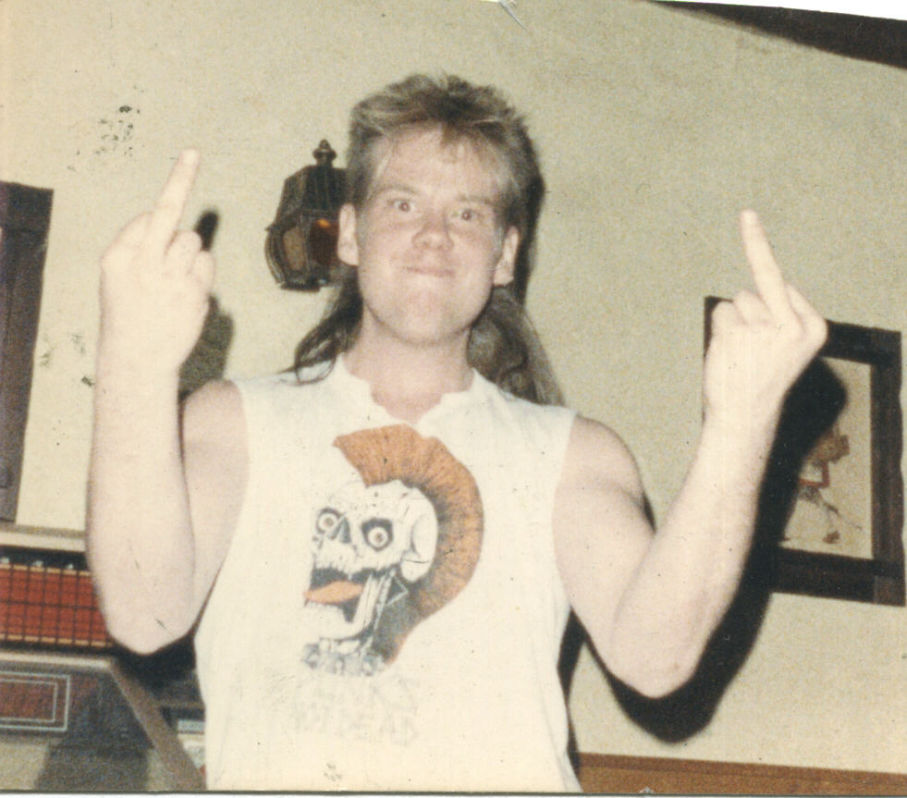 * What's a Relocation Engineer?
yeah, I was a moving man, that was a job title we used when we wanted our job to sound important... I carried over-loaded boxes, any kind of furniture that you could imagine, and my favorite part, packing the trucks and tractor-trailers with people's stuff for local jobs and for trips from NY to Florida and anywhere in-between, I also drank lots and lots of beer! But that was then.

Anything and everything contained on this and any following pages, Property of & © Copyrighted by Garry E Boake!
© Copyright 2022 Garry E Boake. All Rights Reserved.